Spanish fashion entrepreneurs Vicente Belenguer Devesa and Maria Jesus Muñoz Gozalvo had a townhouse in Godella, a high-end residential community northwest of Valencia, Spain’s third-largest city. But with only three bedrooms to accommodate their family of five, and an appetite for a more luxurious lifestyle, the couple decided to commission a mansion that would make the most of the subtropical climate.

In August 2015, the couple, now in their early 50s, purchased an empty, half-acre lot for over $700,000, a short walk from their townhouse, then went on to spend around $1.6 million to build and furnish a five-bedroom, six-bathroom, three-level villa. To incorporate the outdoors, the home’s ground floor has retractable glass panels that turn the open-plan kitchen and living areas into an extension of a spacious backyard.

“We spend more time outside than in,” says Vicente Belenguer Devesa, a Valencia native. Photo: Ben Roberts for The Wall Street Journal 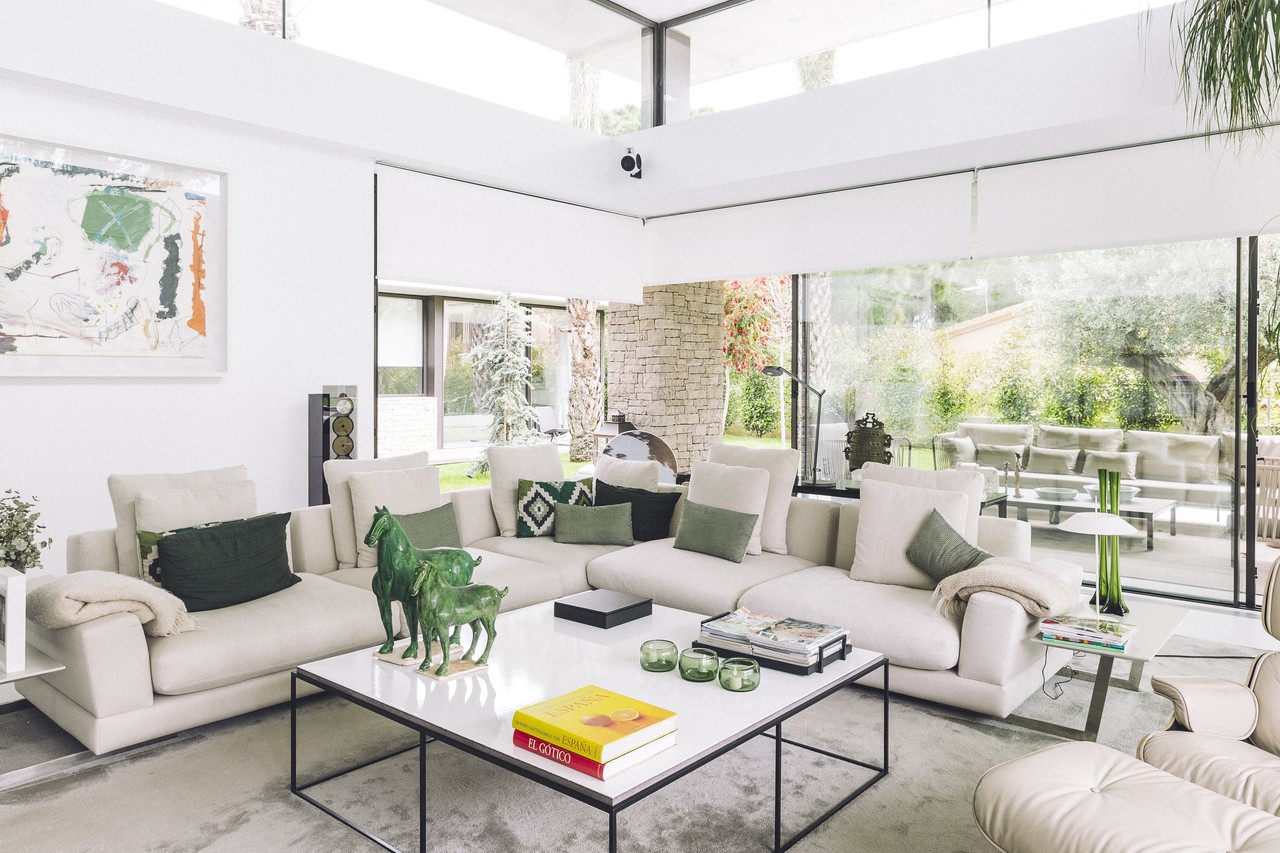 “We spend more time outside than in,” says Mr. Belenguer Devesa, a Valencia native. The couple’s company, Navima Calzados SL, produces a number of women’s shoe brands, including Lola Cruz, which has two boutiques in Barrio Salamanca, Madrid’s equivalent of Manhattan’s Upper East Side.

The couple and their three daughters—Natalia, 20, Elena, 17, and Paloma, 13—moved into the largely completed home in December 2016. This summer, the family plans to put on finishing touches, such as an outdoor barbecue area and backyard shower.

Valencia arguably has the best climate of Spain’s large cities. Unlike Madrid, its winters are mild and short, and unlike Barcelona its hot summers are rarely humid. The couple’s architect, Julio Gómez-Perretta, oriented the house so that the ground floor’s open plan and adjoining yard face southeast. This keeps the site naturally cool, thanks to sea breezes blowing from the east, while sparing it the heat of the western sun.

The couple installed central air conditioning, but “I have only used it for a day or two,” says Mr. Belenguer Devesa. He says they use their underfloor heating a few months a year. They supplement electricity generated by solar panels with a conventional gas boiler.

The industrial aesthetic of concrete floors and exposed cooling ducts is a signature of the architect, whose firm, Perretta Architecture, is a Valencia-area studio specializing in villa construction.

Mr. Perretta, 62, has something of a Brutalist bent, and he opted for unfinished concrete slabs to give the house both its structure and its severe exterior, which he moderated with hand-cut Spanish stones. The home’s main staircase has a banister made of sharply swirling steel, and even the kitchen has a somewhat industrial quality, with a stainless-steel island countertop.

Retractable glass panels bring in the outdoors in this villa near Valencia, Spain. 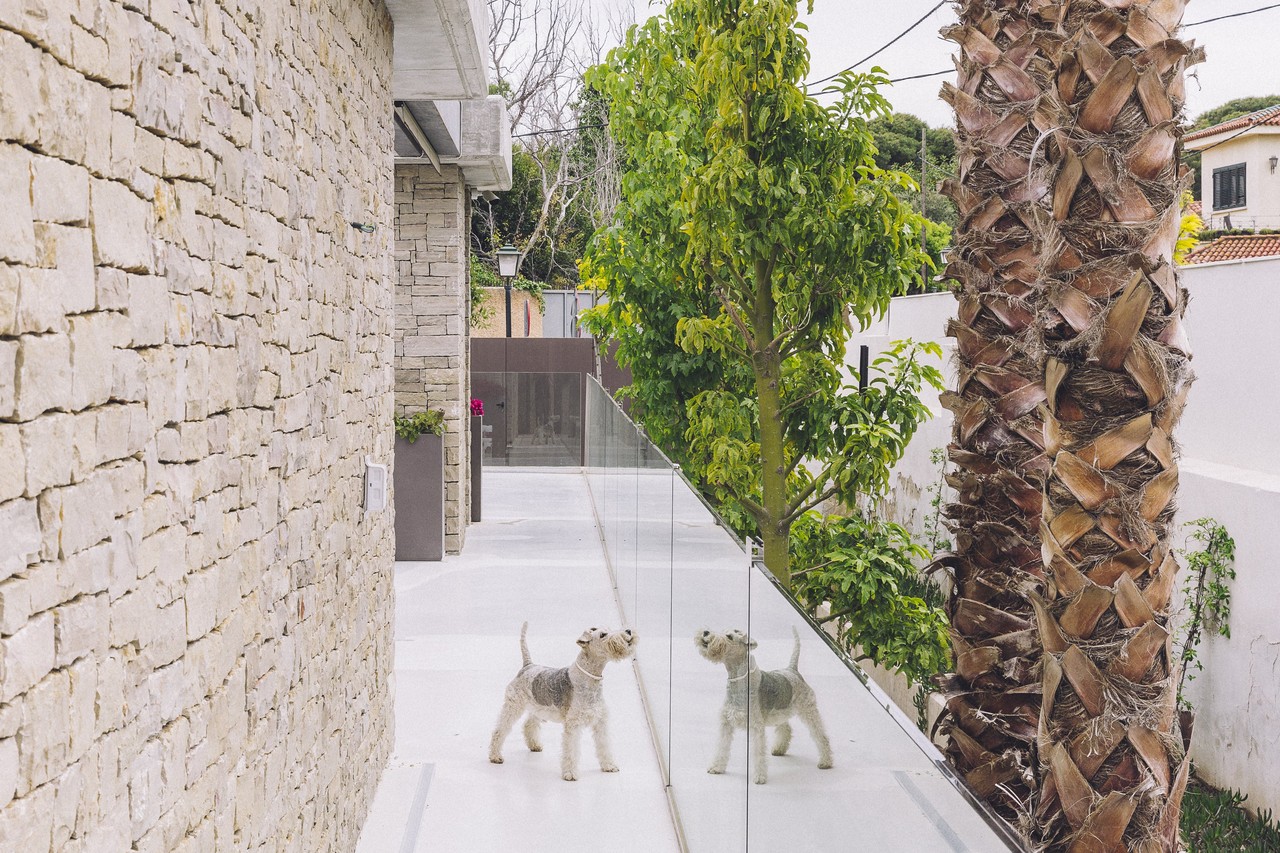 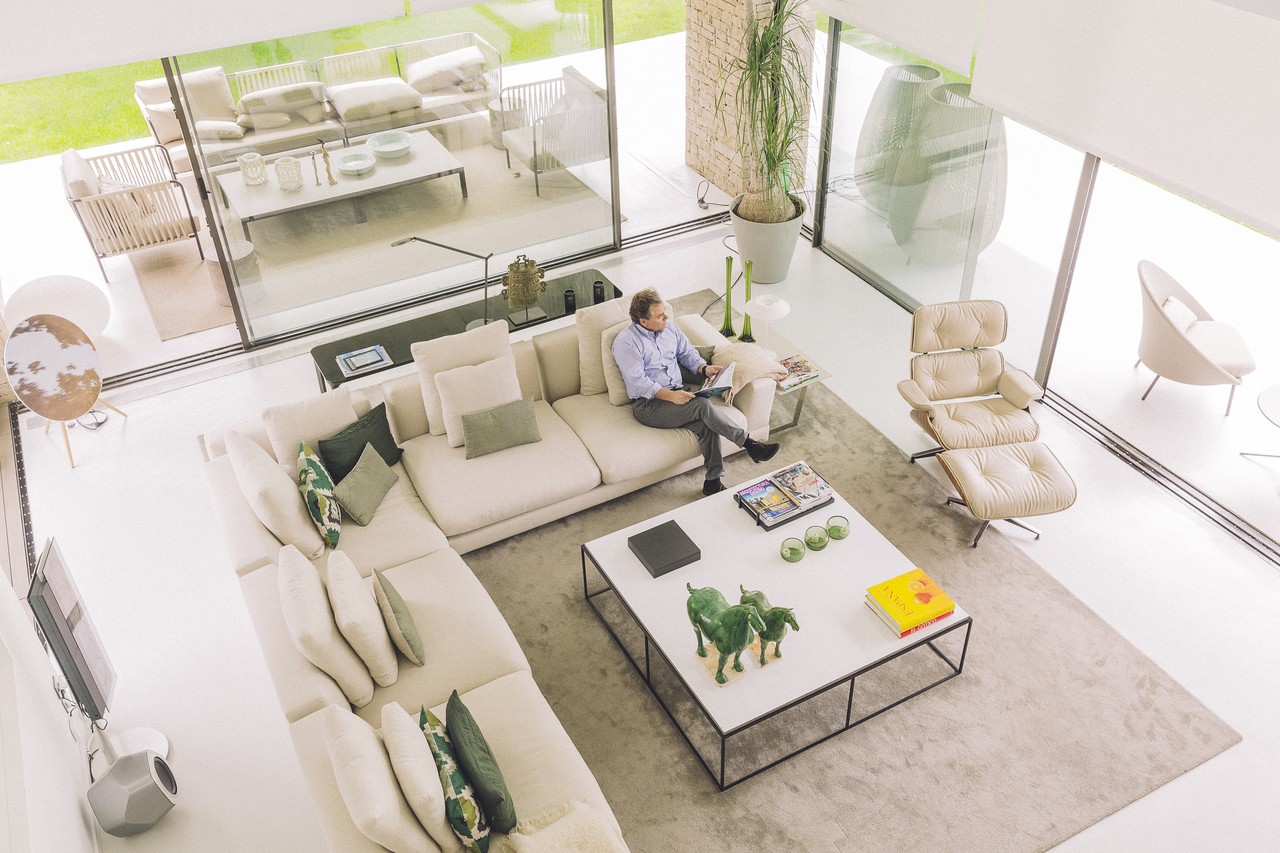 During typically late dinners outside, the family likes to look at the illuminated house, which seems to glow from within thanks to a network of floor-level lights. “I got the idea from a London boutique,” says Mr. Belenguer Devesa.

In anticipation of their empty-nest years, the couple placed the master suite, which features a walk-in closet and private outdoor area, on the ground floor.

In addition to long-term plans for bungalow-style living, the couple planned for the medium term, when their three daughters might all have cars, by building a six-car garage. The daughters got more space to spread out inside, too. In the family’s townhouse, two of the couple’s daughters shared a bedroom; in their new home, each daughter has her own bedroom and en suite bath. In addition, the girls have their own upper-level living room, which leads to two terraces that they use for outdoor parties.

The couple built a 7,500-square-foot basement, part of which they plan to use for a home gym and a staff suite, but which a future owner could turn into an apartment for a family member or rental income. The basement also helps moderate the home’s temperature, says Mr. Perretta, helping to insulate it in the colder months and keeping upper stories cooler in summer. 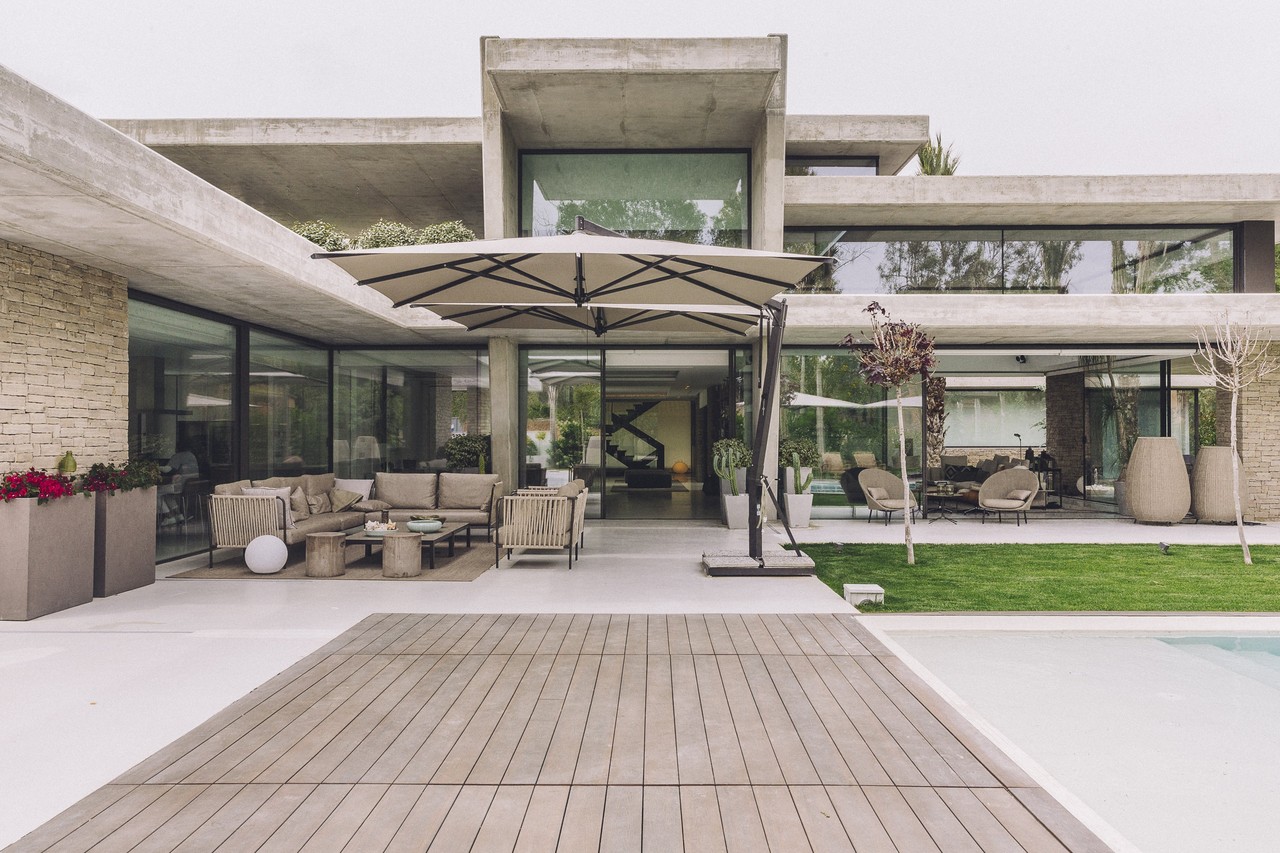 The couple had long had an eye on Mr. Perretta’s distinctive concrete-and-stone style, and before commissioning the new house, they were outbid on another Perretta villa that had come on the market. But a point of discrepancy between architect and client arose over the use of wood in the facade. Mr. Perretta wanted real wood, while Mr. Belenguer Devesa wanted a more durable product, made of compressed wood mixed with resin. Mr. Perretta deferred to his client outside, but had his way with the main interior staircase, which has real oak steps.

Wealthy Valencians have been building villas here since the 1930s, and a trip up to the roof reveals the home to be a contemporary outlier surrounded by Spanish tradition. The roof also provides a dose of natural grandeur, thanks to sea and mountain views, but the family doesn’t have any plans to convert it into another terrace. “Right now, we have enough space,” says Mr. Belenguer Devesa.

Photos by Ben Roberts for The Wall Street Journal 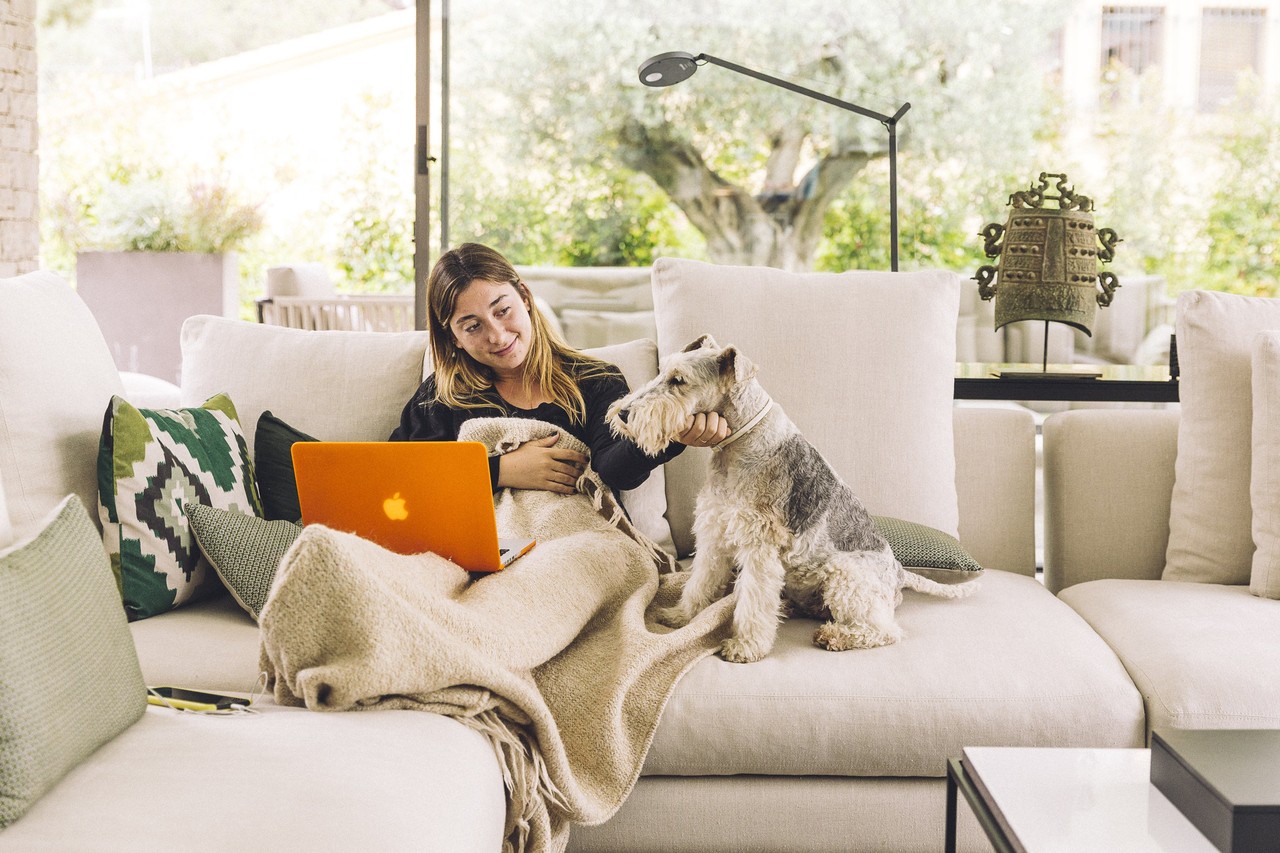 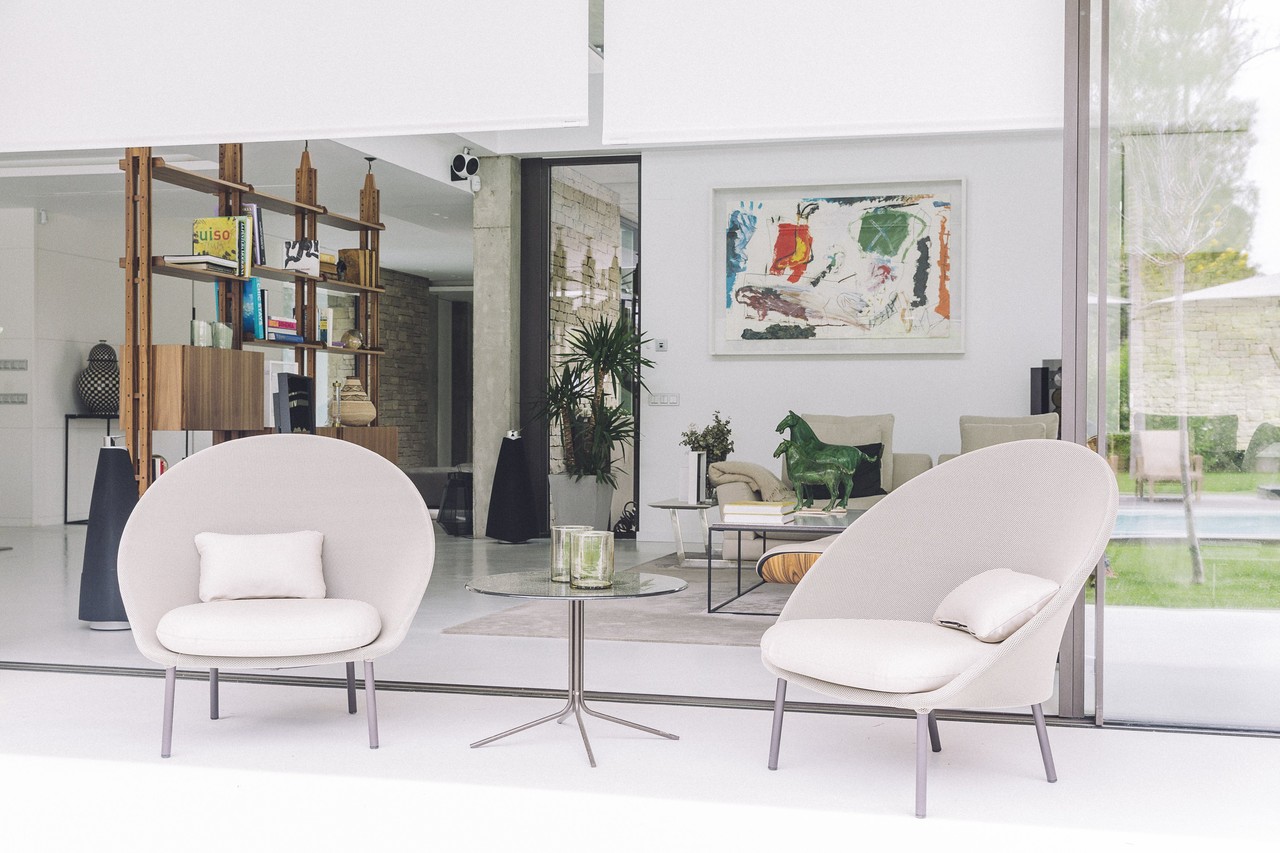 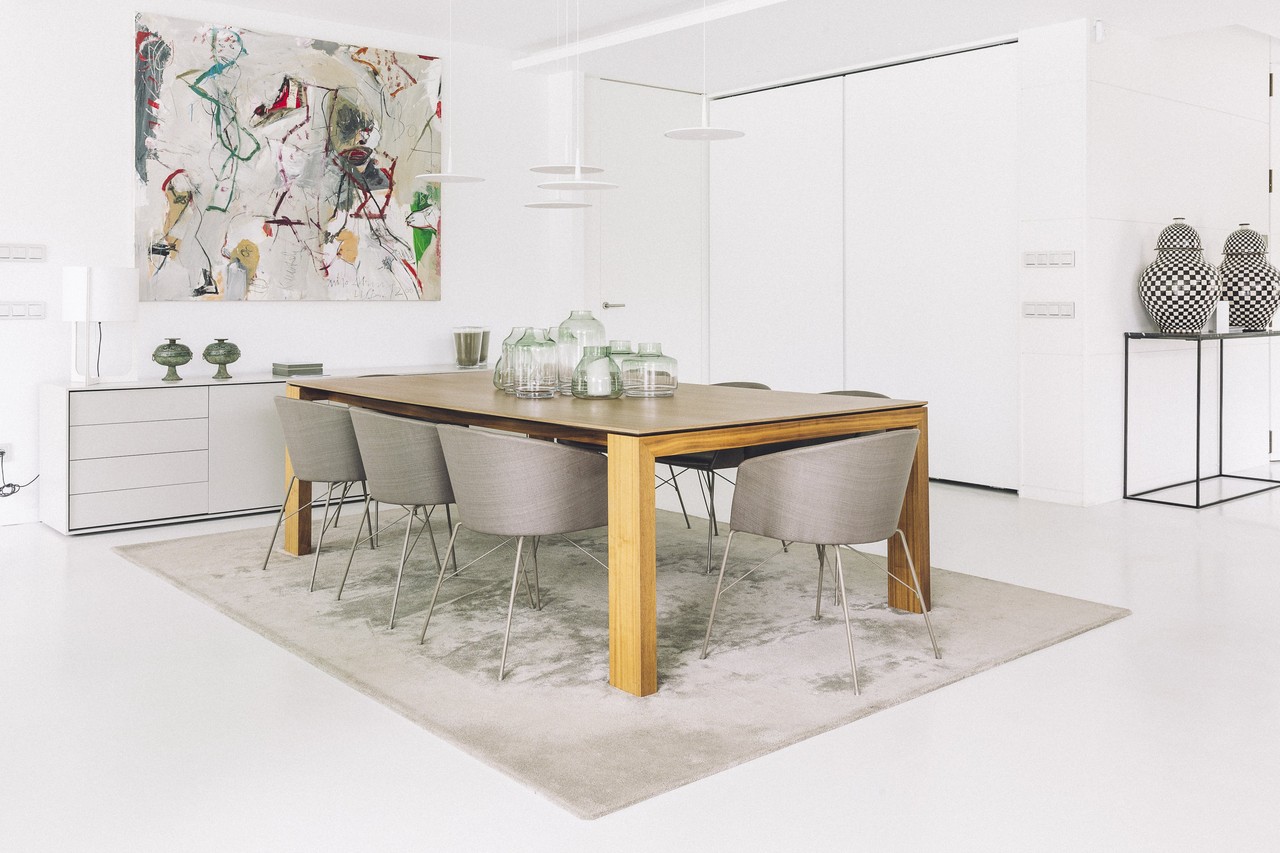 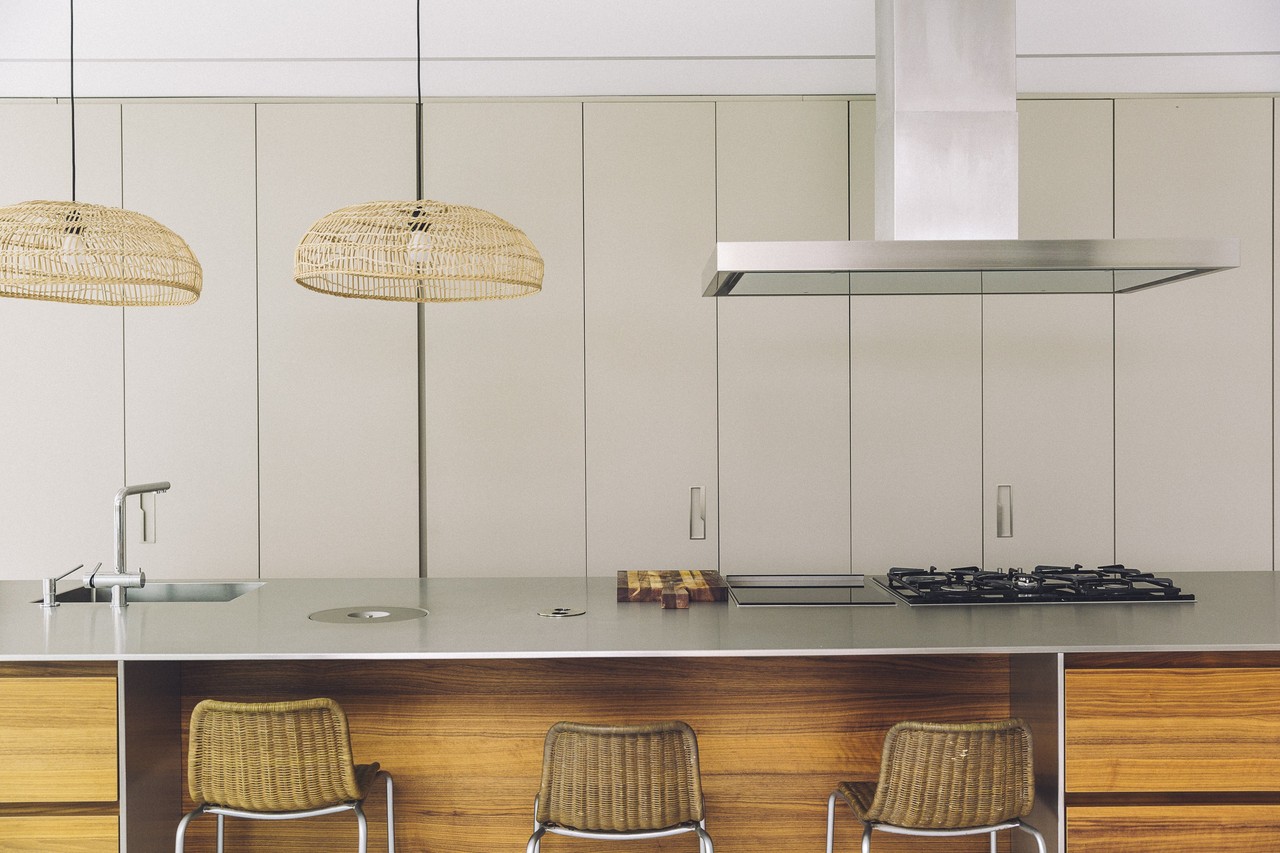 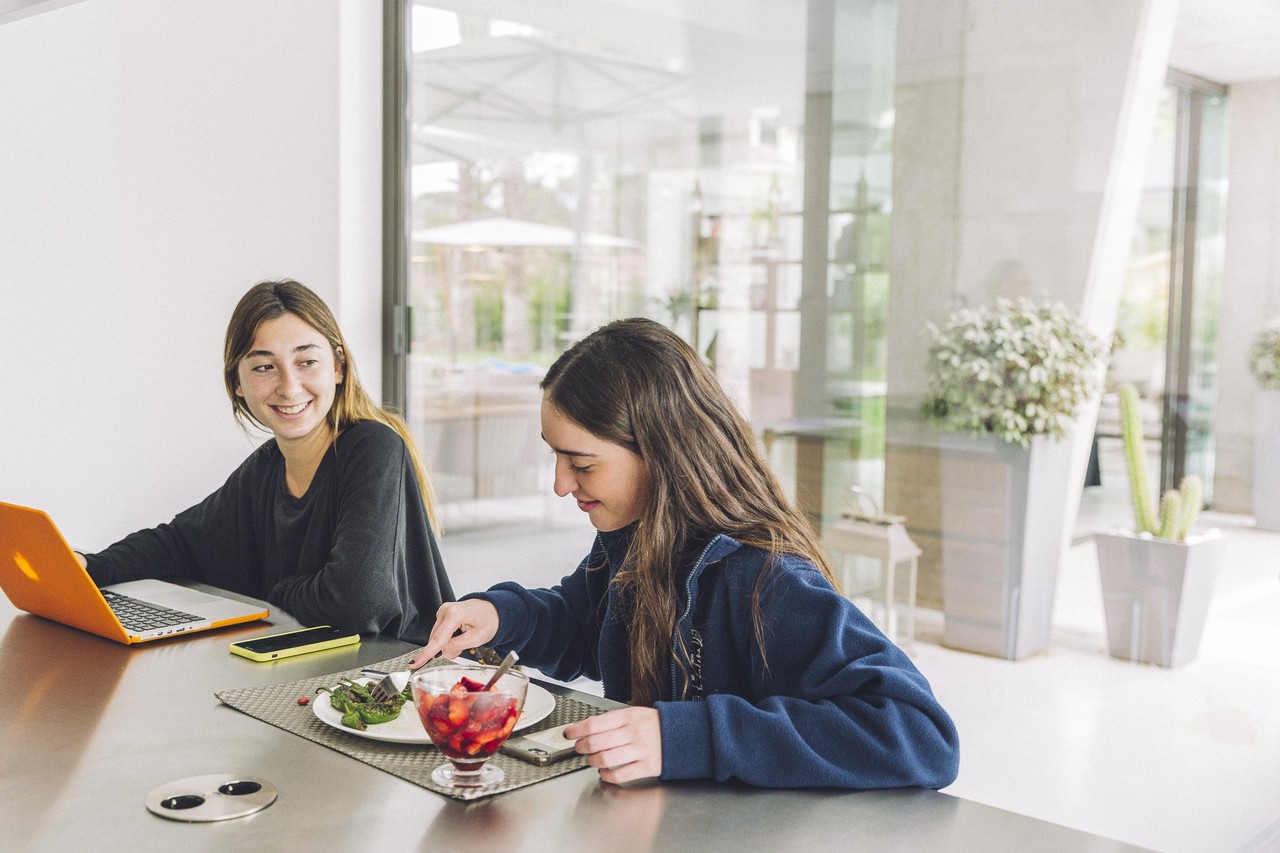 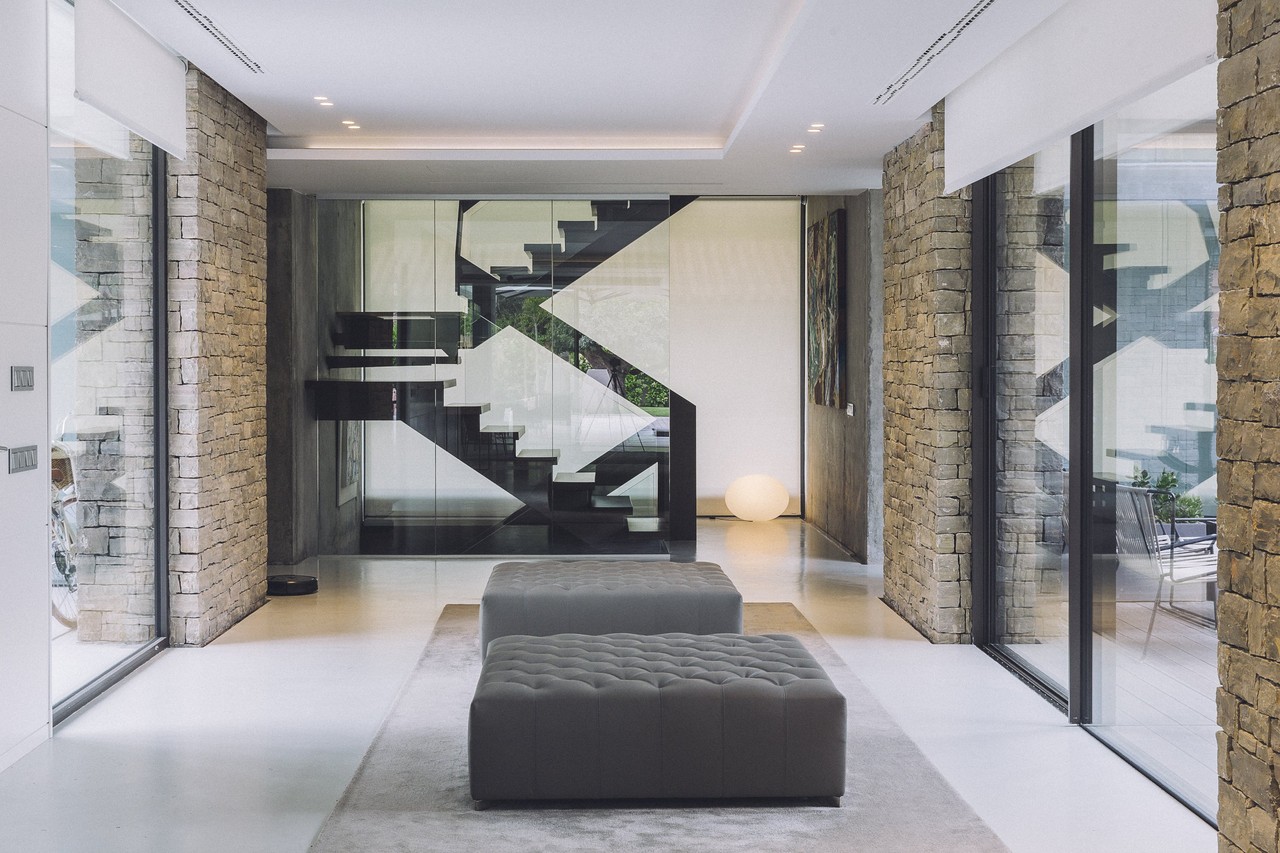 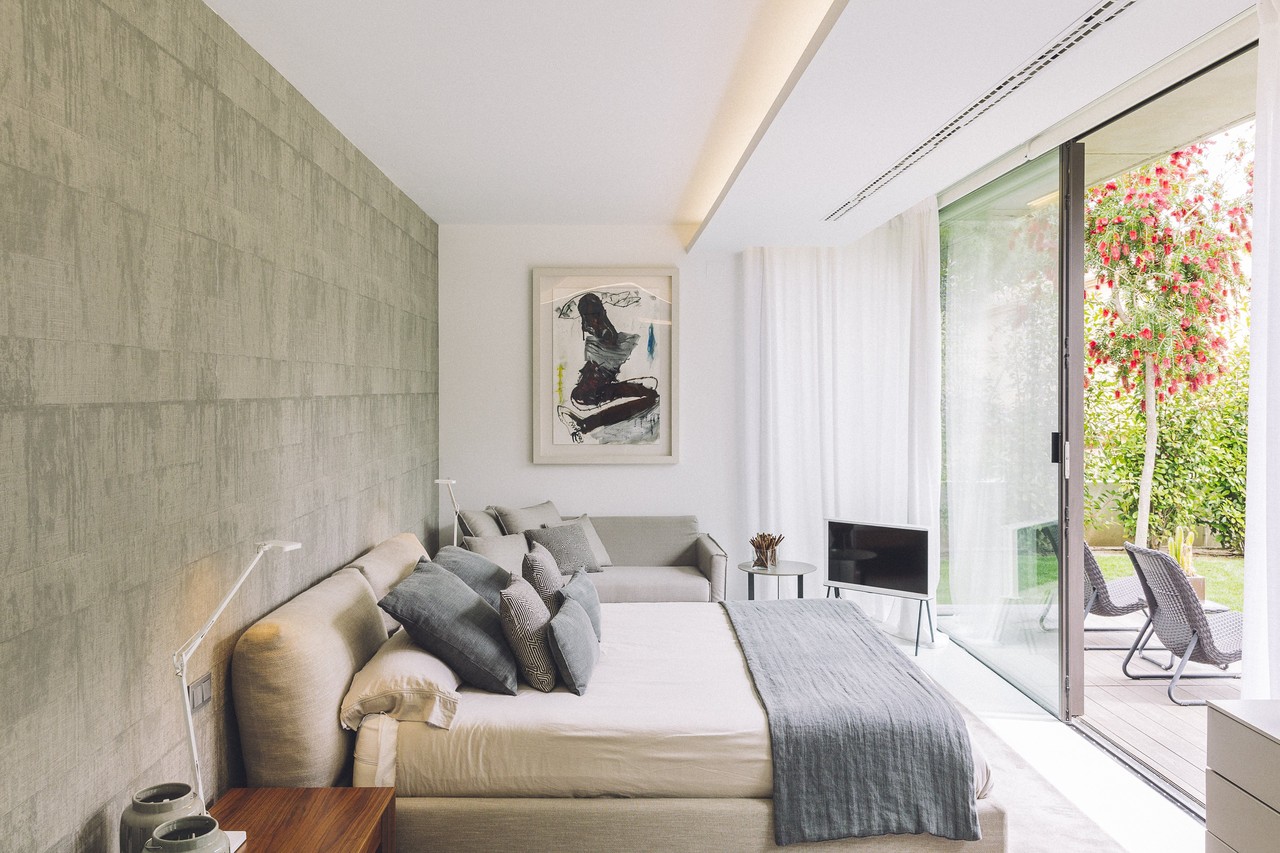 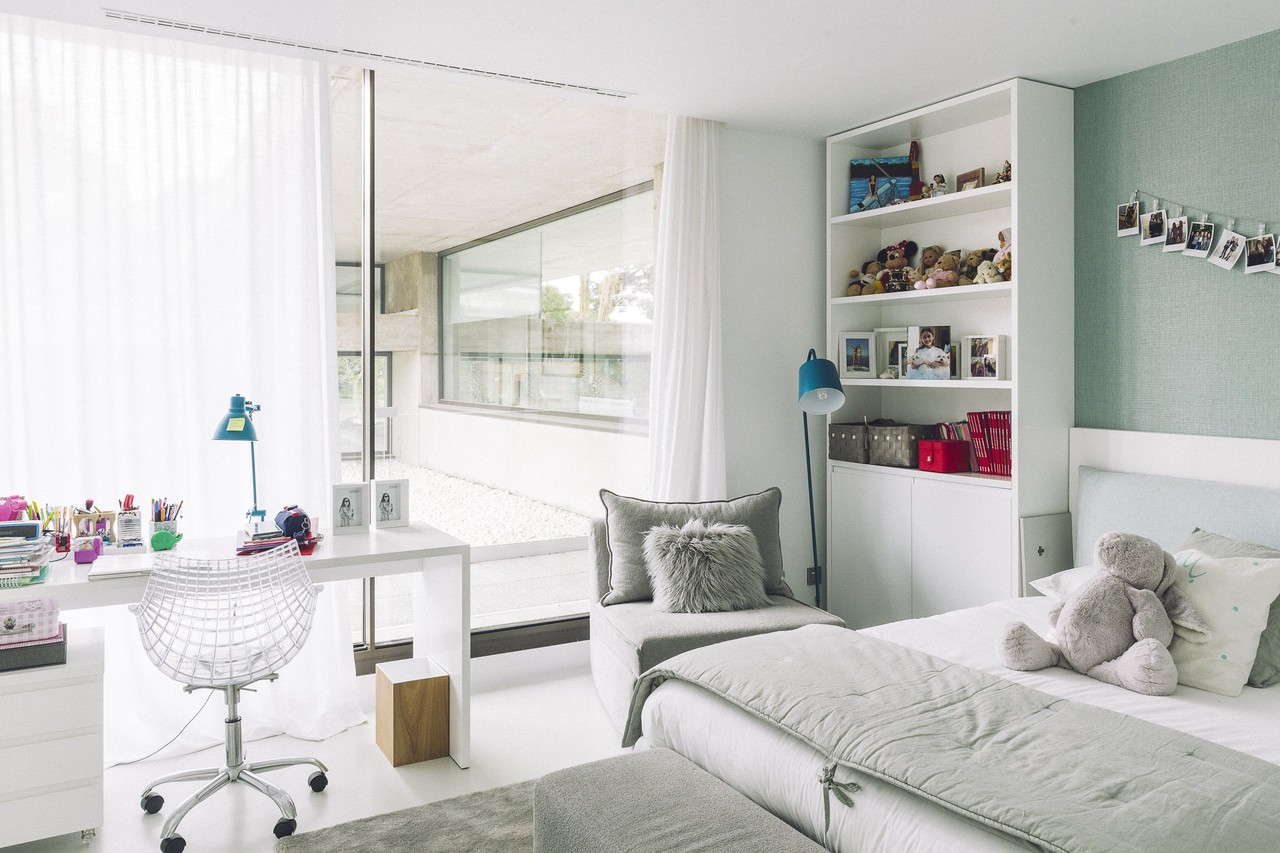 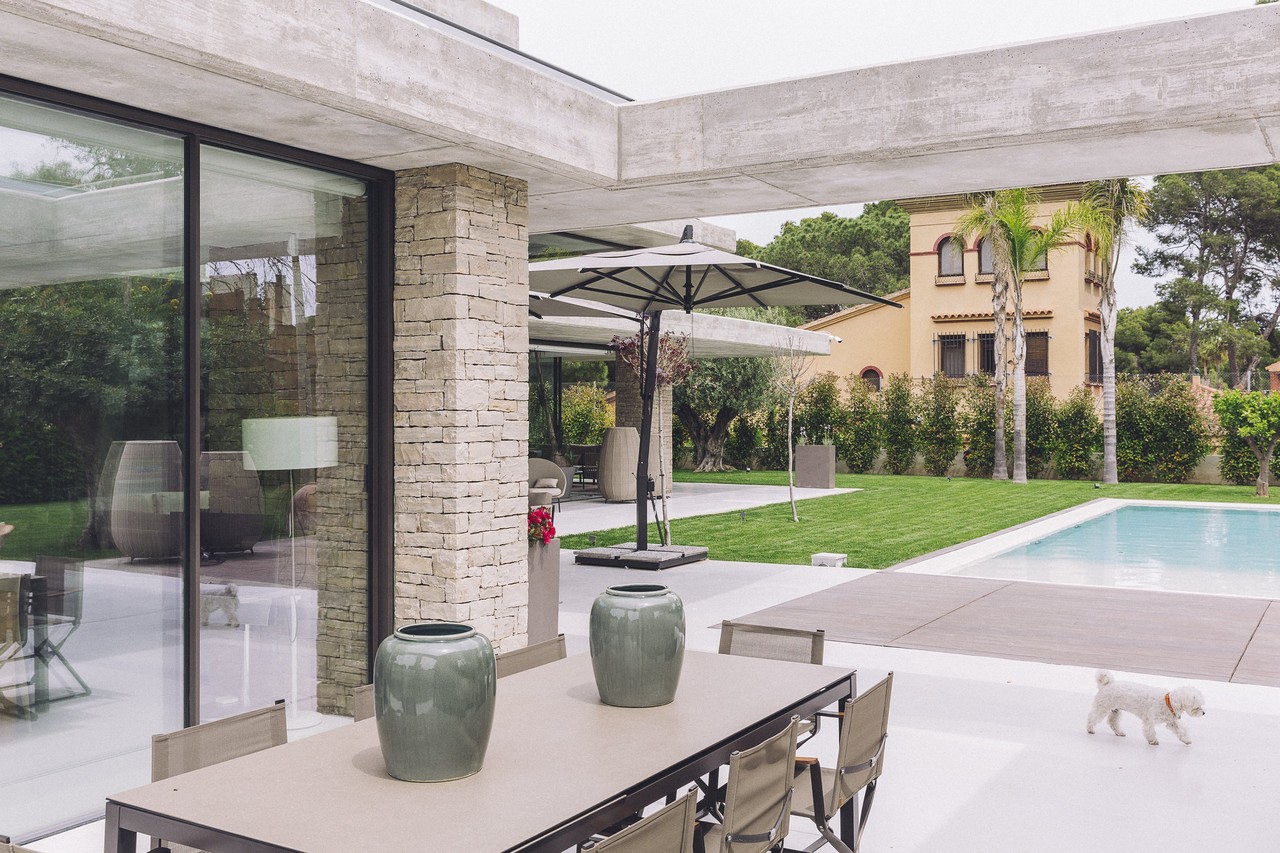 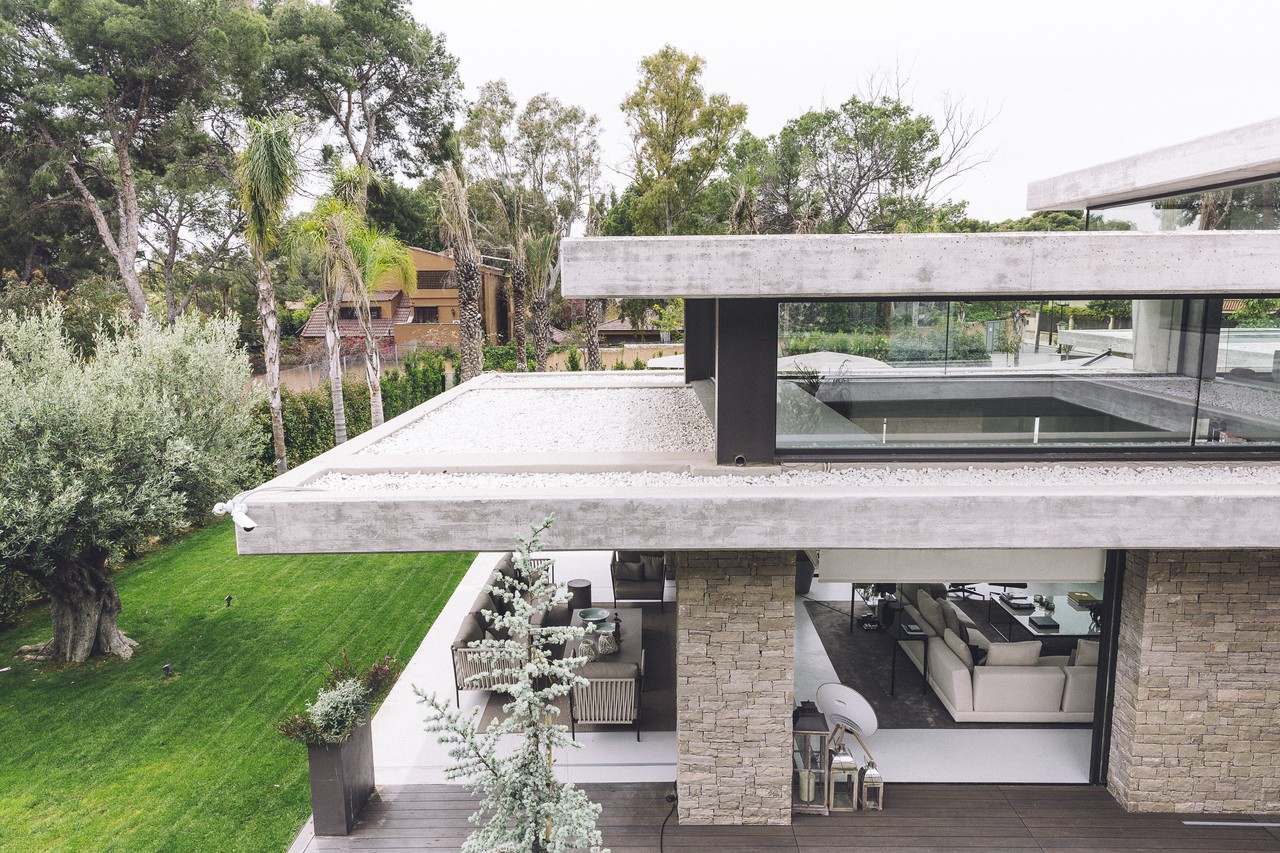 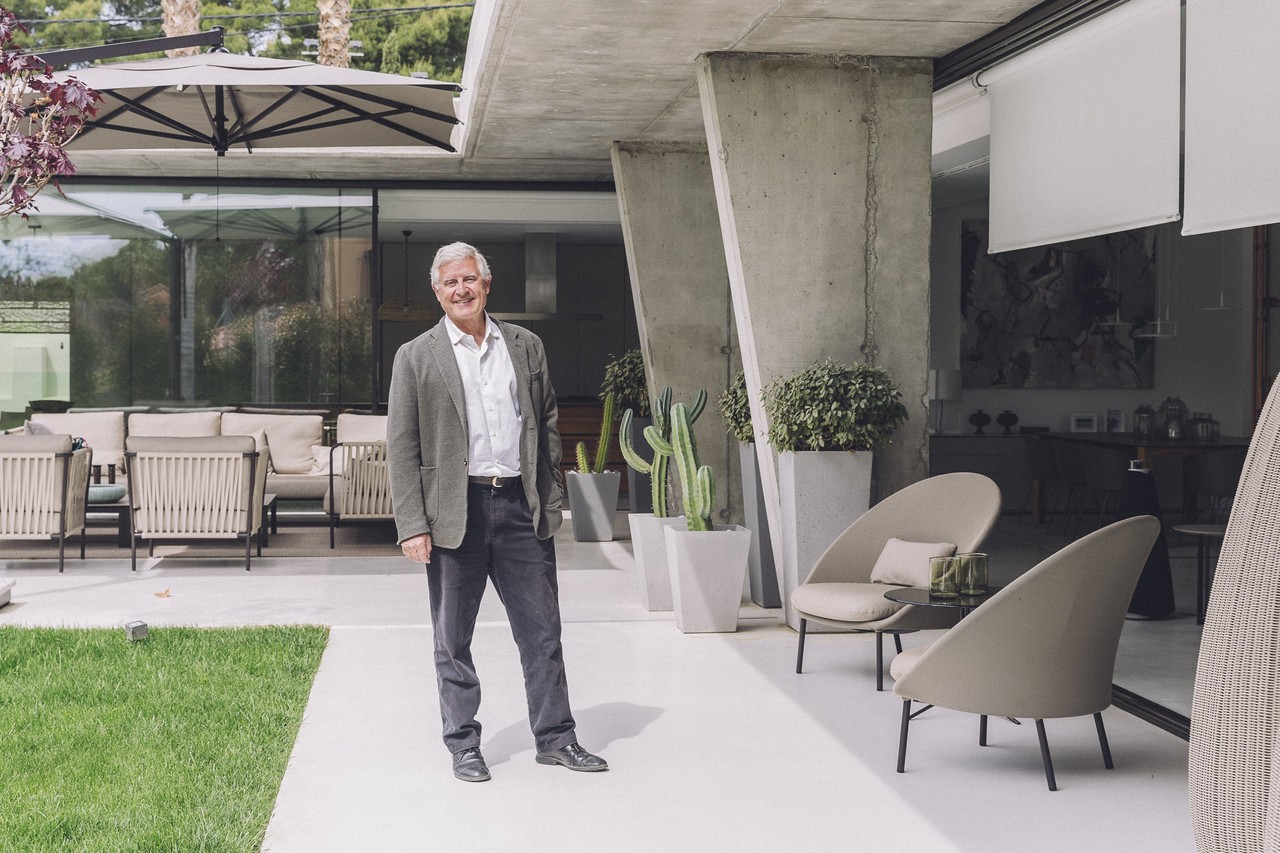